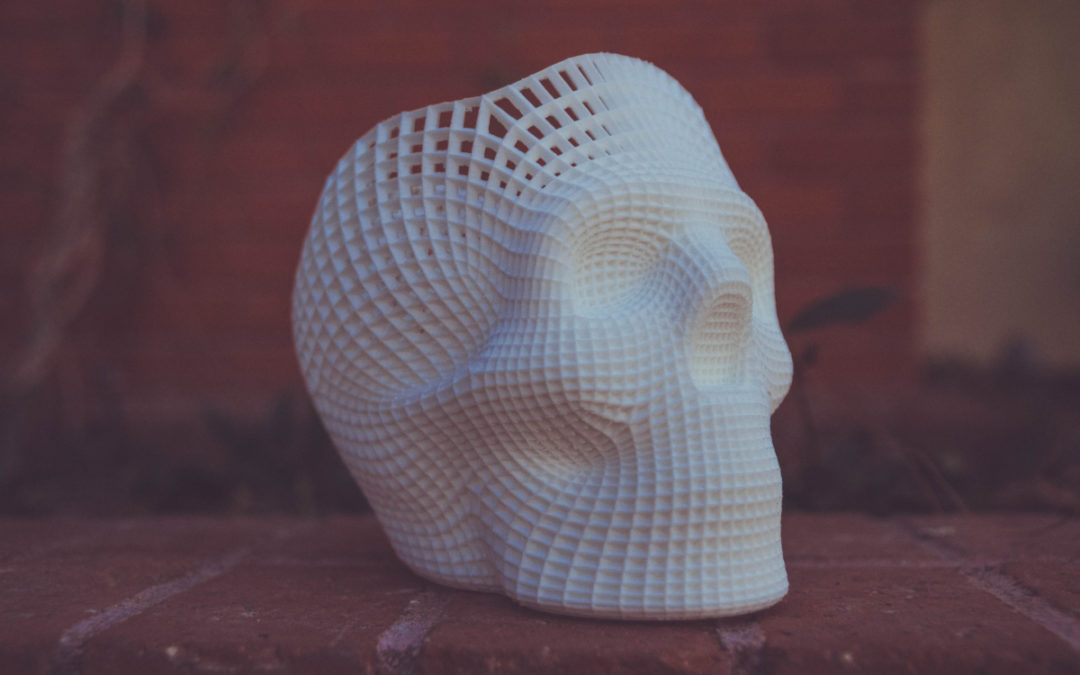 Hull’s first ever 3D printer (he called it stereolithography or SLA printing) worked by moving an ultraviolet laser beam over the surface of a liquid photopolymer. Simply put, where the beam hits the exposed polymer, it instantly turns from a liquid to a solid plastic. A sunken platform lowers itself into the pool of liquid as each layer is formed to make room for the next, until the finished cup emerges. Some 3D printers still use this technique today, but there are also several other technologies, all of which are constantly being fine tuned. The Hulls still own the eye wash cup (Mrs Hull is eventually donating it to the Smithsonian apparently).

Whilst similar photopolymer technology was around at the time, what was so remarkable about SLA is that it allows engineers and designers to create 3D models of just about anything that they can imagine using digital data files, which they then upload to a printer to produce physical, 3D objects, one layer at a time.

LEND ME YOUR EAR, OR JUST PRINT ME A NEW ONE…

Since 1983, 3D printing has impacted society in ways that Mr Hull could have only dreamt of. In 2016, a team of pioneering biochemists and medics at Wake Forest Institute for Regenerative Medicine began printing tissues, bone and organs using 3D printing, that when transplanted into animals, functioned perfectly. They printed the replacement body parts using actual living cells, taken from the patients and cultured in the lab, to ensure that the body’s immune system did not reject them. Unbelievably, in their early investigations they actually used an inkjet printer, loading the ink wells with the living cells and printing with them.

3D printing is also being used to make bespoke prosthetic limbs around the world, more quickly, more cheaply and that fit better than ever before. In 2001 a British organisation called e-NABLE was established that hosts a network of volunteers from all over the world who are using their own 3D printers to create free 3D printed hands and arms for those in need, including many, many children and refugees from conflict zones. The limbs for children come in bright colours and funky designs.

FROM KEY RINGS TO CELLOS, FROM THE COMFORT OF YOUR OWN HOME

The cost of 3D printers has plummeted over the last five years, a quick look online will show that you can actually pick up something small and basic for under £300 now.

As the cost, efficiency and usability of 3D printers has improved over the last 30 years, the use of 3D printing and our attitudes towards it have begun to shift. No longer is it the domain of well funded MIT research groups and tech buffs, additive manufacturing is now a tool of the many. Small businesses and hobbyists alike are using 3D printing to make everything from musical instruments, household and kitchen equipment, toys, jewellery, accessories and get this, even dentures! High fashion is also beginning to embrace the technology to create, not just quirky, but also more sustainable clothing.

Imagine the depth of innovation and technological leaps that tomorrow’s engineers will be capable of using 3D printing?

Primary and secondary schools around the world are now beginning to tap into this technology and are using it in classrooms to fire up learners’ enthusiasm and inventiveness. Initiatives such as The Create Education Project is helping schools across the UK to achieve this by providing access to printers, free teaching resources, training, software and design ideas. They even offer a free 3D printer loan scheme.

We have talked in other blog posts about the importance of making STEM education in schools more appealing and practical in the hope of inspiring future engineers. What could be better then than students being able to design, print out and assemble anything from a robot submarine to a working power drill?

In May 2018, we got a glimpse of how buildings may develop using 3D printing when University California Berkeley Associate Professor of Architecture Ronald Rael unveiled his ‘Cabin of Curiosities’, a fully weather-proof and livable mini-house made almost entirely from 3D printed materials. He and his students used multiple printers to create the constituent parts and also up-cycled various other materials including grape skins and sawdust into building materials. Here is a video tour of this unique and rather beautiful little building.

One of the latest advancements in 3D printing, which is of profound importance to engineering is that the printing medium is no longer limited to plastics. Printers now print with metals, glass, paper and wood.

The sky really is the limit. If additive manufacturing could produce food too, well wouldn’t that be a game-changer…